We came, we saw, we took pictures (continued again) 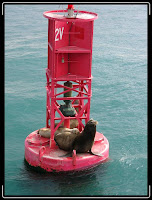 After our in Monterey, we departed on our journey to the southern part of the state, driving near and occasionally on the Pacific coast. Our destination was Valencia, and we were gonna chill with Liz's friend, who had us parading around in a police car in our last encounter. This encounter would lack a police element, but it still was quite entertaining.

The highlight of the stay in SoCal was to be whale watching off of the Channel Islands, but people watching stole the show. While on a late night quest for food, which was rather fruitless in sleepy Valencia, we stopped to fuel up Erika's Saab. Liz and I waited in the car, admiring the Saabyness of Erika's ride while she fueled up. Before long the overhead lights were eclipsed from our view and shadows fell upon us. All we could see out the passenger side was this giant monstrosity of a truck. Someone had put four or five foot tall tires on their shiny new Toyota truck. Growing up in the land of Skynard, I've seen my share of jacked up trucks, but this one may be the only foreign truck I've seen with such, uhhh...redneckenss. The irony is that when the truck opened, out came this midget dude trying to look all hard core and tough. He had this stern and absolutely ridiculous tough guy look on his face as he hopped out. The dude went in to get something (extra small condoms perhaps), and his chick pumped gas. She was no giant either, and she held the gas nozzle over her head to fill the truck with gas. At this point Erika was done fueling, but we all wanted to watch the dude get in, so we pulled out of the station but remained nearby. The dude reached high over his head, opened the door, grasped the door and the seat, and pulled himself up and in like a gymnast. I don't know how his shorty got in, but I'm guessing it wasn't very lady like. 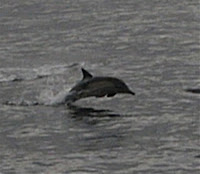 The whale watching was awesome too, but perhaps not as memorable as watching midget dude hop into his truck. We got to see seals, dolphins, and yes whales. Like Gilligan's Island the three hour tour was extended a bit, but fortunately only to four hours. The scenery was awesome too: water, islands, the views of the coast. Oddly enough big lumbering gray whales can be hard to photograph, but we got to see them, which was cool. For me the highlight was the dolphins, as they were so playful and at ease with the boat, often jumping in and out of the wake of the vessel. The numbers were quite impressive too.

We did have some fun people watching on the boat, as there were the usual 'bow dorks' riding up front in the breeze and waves of an impending storm. Each dude had to be as macho as the other and tough it out, despite the fact that the 40 degree weather, high winds, and the vessel going into the wind doubtlessly had their junk freezing to the point of damage. There were also quite a few green faced travelers queasy from the choppy seas. A few people prayed, and the rest just took pills. We were unaffected (no prayers or pills needed), and we went up the coast to Santa Barbara for great seafood and awesome (and highly unusual) sushi.
Posted by Olaf at 9:11 AM