We came, we saw, we took pictures (continued)

Well, the first sights of Sacramento and California left something to be desired. We arrived in the quaint older part of the airport and I think the walk from the gate to the baggage to the car was about 250 feet total. It all was rather convenient, but odd just the same. After we left the airport, we drove through Rio Linda, which seemed to lack a river or anything that one would call pretty. Perhaps my understanding of Spanish needs to grow a bit. Anyway, it could have been called Trailer Park Vista or Mucho Trasho Blanco. Fortunately, we drove through it (Liz's parents aren't white trash. I dunno what I'd do if they were).

The next day brought a trip to Big Sur, which is right on the Pacific, south of Monterey. The journey brought to my attention that California is rather brown--so much so that Crayola could make a box, a big ass box, of just shades of California brown. Now I'm not referring to the Mexicans, rather the vegetation, which seemed to be clinging to the faintest semblances of life. En route, we past the Casa de Fruita, a lovely tourist trap near Gilroy, the 'Garlic Capital of the World'. After gawking at the hokeyness, we continued on to see the elephant seals. 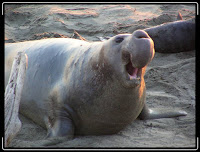 Every year elephant seals, which are more seal than elephant, return to the same beaches (there are two in California) to gawk at tourists. Trying to do my part, I made myself into quite the camera toting tourist, so the seals could enjoy themselves. The mamas had their babies, which they protect and mentor, and the papas ... well they want to make more babies. The mamas resort to burping and covering themselves with dirt to send the message to the soon to be blue-balled boys. Quite an effective strategy. 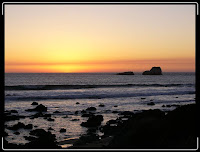 Big Sur was nice, especially the drive along the coast, which is unlike anything in Ohio or even Florida. The sunset was awesome (I'm told that the smog helps produce surreal results). We went to the aquarium in Monterey the next day, and it was everything I'd hope it would be.

Pics of the whole trip can be found here.
Posted by Olaf at 5:49 PM