As I alluded to in the end of my last blog, things really ended on an up note on our vacation. The prospect of a free trip to San Diego notwithstanding, having Liz say yes to a question I've been pondering how to ask for a while really made it all so special.

No it wasn't a successful resolution of the question I asked previously, rather something a bit more substantial. I wish I could spin a yarn of some wonderfully romantic approach to that age old question, but alas I was thwarted with a bunch of circumstances that really forced me to make the most of the situation (I suppose I could have slipped the ring on her finger while she was asleep and explained that she must have forgotten about the wonderfully romantic way I asked her the night before). Anyway, Liz said yes, and I'm a happy boy.
Posted by Olaf at 9:28 AM No comments:

My employer (rhymes with Haitian Pride) was kind enough to send Liz and I on a trip to Walt Disney World last week, so I could officially receive a couple of professional designations (CLU, ChFC, and CASL for those non-existent people who care). To be honest the free trip was a huge part of my motivation for getting this motley assortment of letters to append at the end of my name and stamp out some of the white space on my business cards. While it would have been nice to spend all of my time with Liz and my parents (who joined us for a couple days, as they are still Floridians), I had to be fettered and tethered to the conference that went on (for IRS reasons--this is a "business" trip after all). Liz did manage to spend a lot of time at the theme parks, and oddly enough I did too (a real pimp can be at two places at once). 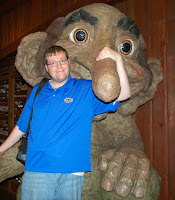 We spent the better part of the first two days at EPCOT, which is dork heaven complete with animitronic dinosaurs, purple dragons, and lots of simulated culture. Liz even got to ride Test Track, which is kinda like a French chef touring a McDonalds kitchen. Oh speaking of smelly hairy types, one of the many fanciful meals we enjoyed was Liz's first encounter with es cargo. We also got to dine with the princesses in Norway, though I thought it would have been cooler to dine with the trolls, provided we weren't the main course. We also got to chow with Pooh, Tigger, and Eeyore in the Crystal Palace and some fellow dorks at the hotel (who knew there was another financial services nerd/engineer couple?) Crazy world indeed. Oh speaking of hotel, if you don't mind power outages (for "homeland security reasons") or intermittent construction that sounded like a moose getting unwanted dental work done, give Hilton a call. 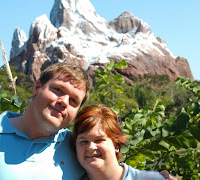 Beyond EPCOT, we went to the Animal Kingdom, where we conquered Everest (really cool ride btw), brought elicit dinosaur contraband back from the past, and got to see many animals (which would seem obvious, but the first time I went there I saw more vultures eating a skunk carcass than anything I wanted to see). Too bad we missed the "Blackhawk Down" parade through Little Mogadishu. The following day we overcame Liz's dislike for free fall rides and being trapped in an Aerosmith themed roller coaster at MGM Studios. Lastly, we wrapped it all up in the Magic Kingdom, where we learned that it pays to complain to Disney employees. In between we got to witness my mom's amazing ability to use her Jedi mind tricks on the greater at the Polynesian meat feast (previously Disney Dining said they were booked full all week and suggested we try a night 180 days in advance!--that's not making my fucking dreams come true!)

Speaking of dreams coming true, I found out that it will be easy to add some more letters after my name and get a free trip to San Diego next September and something else which I'll save for my next blog.
Posted by Olaf at 8:22 AM 1 comment: