I'm grabbing the bottled water and heading the the basement

There will be a Cornhole game for the Wii! I've written about this exercise in laminess and idiocy, before. What is the world coming to! I'm still waiting for a decent curling game for the Wii. Now that's a sport worth promoting.
Posted by Olaf at 1:04 PM No comments:

You know I actually write a gazillion cryptoblogs, but many never really become tangible, thus the dearth of blogs lately. This got me thinking about my lifelong ambition, my manifestation of the "American Dream" (btw isn't it rather ethnocentric of us Americans to assume such aspirations are exclusively American? What's the Canadian dream? never mind, that was expressed in Strange Brew). Anyway, I was was thinking about not writing a blog about writing a blog about something I dream of that I always wanted to do but never have--kinda like the blog I wasn't writing ...

Who needs an orangutan when you can have a sasquatch? Who needs goats in a petting zoo when you can have the goat sucker! Who needs a zebra when you can have a unicorn! This is stuff P.T. Barnum can only dream of, and now I can only dream of! The beauty of my innovation isn't the wonderous nature of the critters, as others have already made them up (moonshine, marijuana, and other vices may have played a role as well--is it a coincidence that big foot gets sighted in forrests with shrooms or Nessie gets spotted by drunken fishermen?), rather it is the limited overhead. Yes this is a business (I suppose that's the American aspect of the "American Dream"), and there are costs and consumables.

The costs, next to none. It's a cryptozoo, so once the animal actually exists, well then it belongs in a real zoo. As long as it's a zoo for make believe animals, there only needs to be make believe exibits. A fenced in area with trees, large foot prints, maybe a nice pile of poo (readily available thanks to owning a Saint Bernard) and voila! an exhibit of a sasquatch. Set up some interesting sound effects, pay a cryptozookeeper to stand there and talk about seeing the sasquatch a little bit ago (heck there are whack jobs who would do it for free--and not even know how full of shit they are!). Next to that a pond, with a smoke machine running full tilt, maybe a few odd shaped logs floating around (and a beer cart selling concessions to boost "sightings"), and you have a Loch Ness Monster display. A few gnawed up goat carcased, a stand selling souvineer barf bags, and you have a chupacabra lair. The list goes on and on ... Oh, and don't forget the nightly alien light show!

As for the consumables, well that's the souvineer stand. Who would want to go to the worlds only crytozoo and not come home with a cute plush Abominal Snowman or the even more Abominal Snowwoman? How about souvineer sasquatch poo (time to turn Kuma into a cash cow)? T-shirts, lunch boxes, goat meat, the list goes on and on.

Any investors?
Posted by Olaf at 12:22 PM No comments:

A flame is extinguished, but never will be forgotten 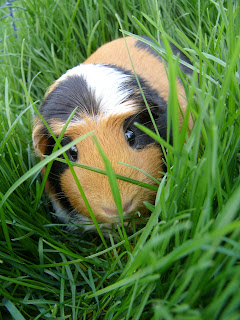 Of all of the girls in my life (and there really aren't that many), none have been there longer than my Sophie. From the first time we exchanged twinkles in our eyes, until our last caress this morning, she's always been my girl. Sweet, sassy, spunky, and not at all shy at the dinner table, Sophie was always true to herself and me.

Every morning I'd go check on her, and like clock work, she'd check on me. I guess this ritual goes back to when she was pregnant and I'd check on her every morning (well every afternoon, evening and night too). They weren't my babies, but she was, and I helped raise them like they were my own. She didn't need much help, as she managed to sneak out little Boris, Natasha, Ewa, and Felix on one of the nights I wasn't by her side--I guess a gal needs her privacy. What's more amazing is that despite having an extra 50% of body mass, she managed to hold on to her bladder for astonishing periods of time while I had her on my lap massaging her sore joints and back. She was my little girl. 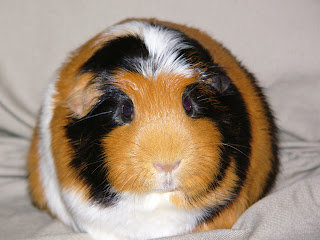 As her pretty daughters (they got their good looks and cute cow-lick from their mommy) grew up, a bit of jealousy and a bit of "grow up already and move out" set in, but I think she just wanted her daddy all to herself. Heck, she'd sometimes nip at or give golden showers to others, but not her daddy. Even in her old age, outliving even the most optimistic of expectations, and half of her own offspring, she remained true. This morning when I checked on my little girl, she was there waiting for me, eating her food, but no longer in this world. My little Sophie was gone. 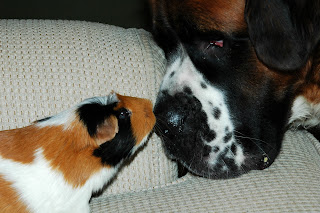 Sophie entered my world on October 28th 2003, and left it today, May 7th, 2008. She was a little guinea pig, but her heart was bigger than a capybara. I'll always love you Sophie.
Posted by Olaf at 7:22 AM No comments: