We came, we saw, we took pictures (finally over) 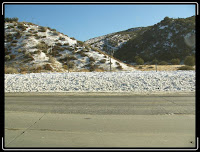 Before long it was time to depart SoCal and head back to Sacramento. We decided to take a detour via San Francisco to make our trip all that much more interesting. Mother nature almost made us make a detour of her own, but we were able to go as planned via I-5--unfortunately all was not well there. You see they had quite a bit of snow (a few inches, which might as well be a few feet in Southern California). Folks there just don't know how to handle snow. When I say that, I'm not just speaking of the average Joe, as the folks taking care of the roads appear clueless too. Rather than use something sensible, such as salt (likely plentiful too--they have that big ass ocean to get some from) , they used the only thing that is more plentiful--sand! While salt and sand may appear similar at first, only one of the two helps melt ice/snow, and they chose the wrong one! So to make things safer (both from the snow/ice and the man made obstacle: that stupid sand), they insist on escorting the cars at a ridiculously slow speed to make it all safe and retarded. I officially started to miss Ohio. 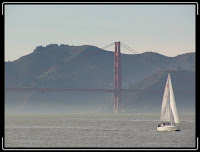 Spending an afternoon in San Francisco certainly falls short of seeing it all, but we packed quite a bit in. I got to see the Golden Gate Bridge, Alcatraz, and we ate at Fisherman's Wharf. My quest for Rice A Roni went unfulfilled, but we enjoyed some great seafood with nice views. 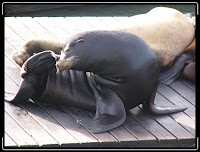 Speaking of views, we got to spend a while admiring the wonderful characters that were at Pier 39. These included so many interesting people that Liz had to refrain from commenting to keep her voice in check, and there were the sea lions too. Even if I did get some Rice a Roni, the highlight still would have been the Sea Lions. They were huddled onto a few floating docks--packed almost like refugees (they likely smelled better though). These big fellas seemed to enjoy the sun and the tourists. Whenever a boat would pass, they would stand at attention and great the guests with a loud chorus and many waves. Every once in a while one of the sea lions would want to crawl on top of the others, which would create quite the ruckus.

The only other memorable moment of note after returning from San Francisco was flipper boy, a dude who wore a tank top that would qualify as long sleeves, since his hands were attached to his shoulder. Miraculously, we were able to watch him eat ice cream and watch others watch him eat ice cream (which was even more entertaining). Sadly no pictures. 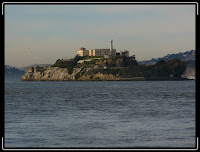 California was interesting, enjoyable, and a nice diversion from our day to day life, but we were very glad to be going home after a week. Thankfully everyone was safe and sound when we got home. We're definitely going back (Liz's parents newfound liking of me would cease if we never went back), and hopefully we can spend more time towards to top half of the state, perhaps touring wine country as well.
Posted by Olaf at 10:16 AM