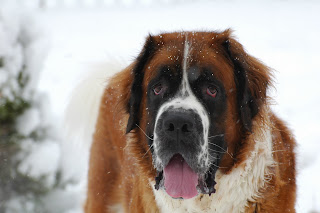 Last week it snowed here--it snowed quite a bit by Columbus, Ohio standards. Anyway, being the first snow of the year, the boys were rather excited about it all. Not wanting to pass this opportunity up, I grabbed the camera. 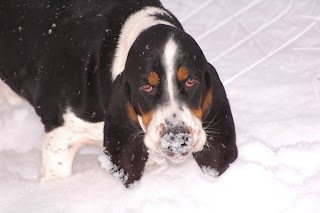 Stuart and 'Kuma ran around, played with each other, and ate snow (fortunately not the yellow stuff). The didn't seem to mind it at all, which is no surprise for 'Kuma, who is a St Bernard after all. 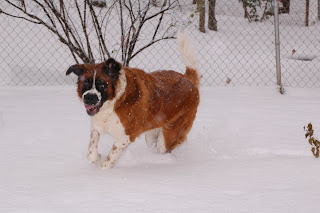 If you haven't noticed, I'm running out of things to say, so I'll just post a link to the rest of the pics and leave you with an image of Stuart barely keeping his junk above the snow. 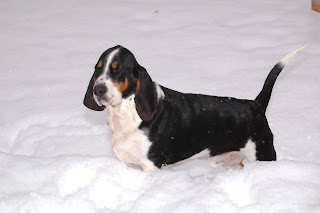 The End of The Year

Well, it's that time of year again. but I will spare you the monotony of a year end recap (well, for today at least). Last weekend, well weekend before last, as I've procrastinated a bit, Liz and I attended the year end party for her employer (rhymes with Yolanda). Now I've been to a couple of events from my employer (rhymes with Haitian Pride), though I kinda expected something much nicer, as Liz's coworkers have described this party as a prom of sorts. Anyway, enough of the buildup.

The party was at the Arena Grand, which is a newish mid-sized downtown theater. The Arena Grand has 8 screens, a large central lobby, and a couple of mezzanines above that. I half wondered how a company party could occupy all of this space, but the invite mentioned quite a few destinations (it had a New York City theme), each complete with food and activities. As we approached the garage, it was obvious that only company employees were welcome, and as we walked toward the theater, we were greeted with covered and heated walkways instead of a cold windy sidewalk. We get to the theater, and most people are dressed rather nicely, with many guys in suits and tuxes and many ladies in dresses and gowns. Some took it to the next level, with dress kilts, kimonos, and full cowboy regalia. We quickly got over our people watching, and sought out the food.

Our quest was brief, as we were bombarded with salmon hor'dourves and butternut squash shooters (yeah, there may be a NYC theme, but we're still in Ohio). We walked past a huge spread of meats and cheeses, as we were on a quest for sushi. We came, we ate, and we conquered. Damn there was a shitload of sushi there, and since we were unfashionably early, we could chow down. Afterwards, we sought out dinner. Yes, there were hor'dourves, sushi, and dinner. Dinner included all kinds of meats and mashed potatoes in martini glasses.

After dinner, came desert (chocolate fountain), and then pictures, a movie (Fred Claus), a comedy showed (we ducked out), video games (Wii), and karaoke (of course). There was a jazz band at dinner, which like the sushi was outside of the theater. Back to the video games, watching a couple in a suit and gown play Wii Tennis is a hoot. I never used a Wii before, but I got quite a workout bowling. On our way out we scored cotton candy and a Coney Island hot dog.

Needless to say it was very grand, larger than I expected, and blast. Next year I'm bringing a doggy bag.
Posted by Olaf at 7:46 AM No comments:

I am a Rock God

There are many things a lady can say to a man to make him all giddy, for for the purposes of this entry, I'll focus on one of them in particular "we should get Guitar Hero for Christmas".

After reaching a critical mass with whole episodes of South Park devoted to it (still awaiting the Heroine Hero game), it would be hard to resist. In fact, I've had lengthy discussions with a host of coworkers, all adults as I am--many even older than I, about Guitar Hero. Some even ponied up for Rock Band, and tackle the drums and guitar in an attempt to live out their dreams. Well for now, lets real it back in. Yes, Guitar Hero 3. Owning a 360, we opted for the easier to find Sams Club bundle (comes with the wired Guitar Hero 2 controller), and upon unwrapping it, the madness began.

At first it was pretty ugly. Getting booed off the stage sucks ass, even if it's just a game. Hell, it's even worse when it's a game, as you paid for the damn thing. Not one to get shown up, I persevered. Picking the right songs and finding my rhythm, I survived playing "Talk Dirty to Me", "Barracuda", and "School's Out"--all relatively easy for folks not in the know. I appeared to plateau, and soon I'd be washed up. Liz started to play, and she experienced the same blues, but then too she got better. I began to resign myself to musical parity or perhaps a parody of music. Then it happened.

My untapped potential got tapped, and then it was neither untapped nor potential. I was a rock god. Songs like "One", "The Number of the Beast", or even "The Devil Went Down to Georgia", bowed before me and my greatness. Now on to medium difficulty!
Posted by Olaf at 4:32 PM No comments: