Putting the cart before the horse 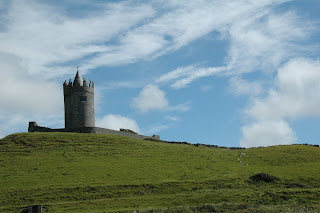 Before I start some long rambling blog or series of blogs about our honeymoon, I should write about our beautiful wedding. Well I should, but I won't (not today). Anyway, our honeymoon. I suppose our honeymoon began when we left the reception, but to avoid writing some torrid romance, I'll start with our flight to Ireland. Ireland is surprisingly close to the US, and our flight to New York and our layover there was almost as long as our trip to Ireland. In that layover, Liz and I had the opportunity to see the Ukrainian Special Olympics team. I never met an Olympian, but it likely was best that we didn't ask for autographs or photos. In hindsight, I wish I asked for both. Before long we were on our flight to Shannon, Ireland (no where near Kathy). After a bit of shock at the cost of the more or less required insurance (it will pay off later), we were rewarded when the kind unassuming lady behind the counter blurted out chuckling "drive it like we stole it". If we ever stole a car, it would not be a golden Hyundai Getz. 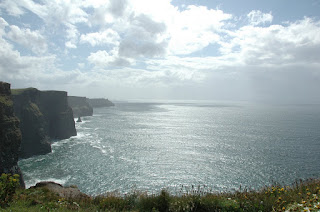 After whirling through two dozen or so roundabouts (and a few roads not on our Garmin) we arrived weary and jet-lagged in Doolin, a seaside town known for its music scene. A uber power-nap revived us for a trek to the Cliffs of Insanity Moher, which in true Irish fashion was cast in an overcast sky and on-again / off-again drizzle. The cliffs were a sight to behold, and you really need to be there. The fact that they had a suicide hotline # posted was a real clue that nothing good comes from getting too close to the edge. Seeking a better way to get near the salty spray, we went to the docks in Doolin. A quick glance revealed why there were no boats departing, but it sure was a great sight to see, let alone sound to hear. All of this is a whirlwind that was just day one. 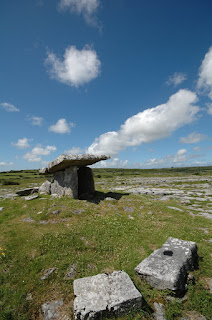 I had been not so much persuaded but rather goaded into the Irish Breakfast, which is likely what the wicked witch fed Hansel and Gretal. It's huge, but I suppose you gathered that already, but it's also heart and well ... fatty. Irish folks love bacon (well they call it that, they like our confused friends to the north--and I don't mean Michigan-- call this odd hammy stuff bacon), and they love sausage (bangers in Gaelic) just as much. A few clogged arteries later, and we were off on our journey to the Burren. Ever wonder what the moon would be like with lichen and sheep? Well we were there, and we took pictures. Its really hard to describe, but its really amazing. What's sad is it's really just some giant ad for conservation efforts, as cave men (and cave women--time for you cave gals to stand up and take the blame as well) apparently damned themselves by felling a few too many trees. One thing led to another and everything lighter than boulders blew off into the sunset. Oddly enough conversationalists had to stop yuppies from boosting these rocks for zen gardens.