Putting the cart before the horse (part 3)

You wanted more? I sure hope so, as here it is: 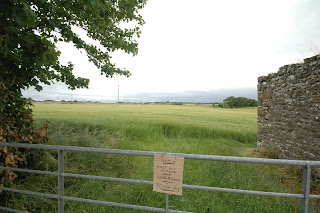 One thing that was omnipresent from our time in Connemara through the rest of the trip belies visualization, as relies moreso on other senses--notably smell. Ireland has a unique way of fueling fire, almost as creative as Cleveland's use of flaming rivers, they burn the dirt. You read that right, they dig up peat in bogs, slice it into bricks, and dry the lot. The dried bricks of peat can be burned. You can even buy peat briquettes in grocery stores. The sweet smell of peat permeates the landscape, and homesick Irishmen can even buy incense that smells like peat.

So we drove south from Connemara, smelling peat, and enjoying the countryside. Friday was a disappointing day, as everywhere we ventured seemed to be closed, off limits, or a secret place to park and fornicate. We spent an hour looking for the legendary Castle Mattrix, but we were unsuccessful in finding a way there.

Putting Friday's disappointments behind us, we set off from Adare and headed toward Dingle. The last words of the gentleman at the B&B were to warn us to avoid a certain town (Castlegregory) if it was cloudy. It was cloudy--Ireland and all, and we decided to head there. It wasn't that bad--how bad could it be? Well Castlegregory was fine, though the clouds and rain tempered the view quite a bit. We were able to see surf shops, surfing school, and lots of tourists. It was almost like Florida--well not really. Anyway, we had survived Castlegregory. We then set out to get to our final destination, Dingle. We had no idea what we were getting into. 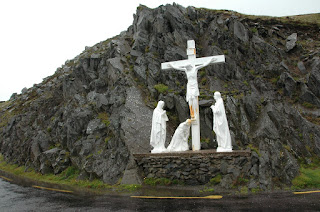 There's only one vaguely direct route between Castlegregory and Dingle--the Donner Connor Pass. The clouds and rain hindered our view of the pass, but we clearly saw the "Turn Back Now" signs--both sets. We trekked on. The road, like most we encountered in Ireland, typically accommodated 1.5 normal sized cars, which is about the size of one US highway lane. Unlike that highway lane, which is meant for one car going one way, the roads in Ireland are meant for two going opposite ways. The road to Connor Pass started as 1.5 cars wide, with occasional moments that allowed for two, but it degenerated to barely accommodating one car passed the second "Turn Back Now" sign. This would be problematic with two way traffic on a cliff side, which was the case, but throw in one more variable, and it became rather crazy: fog. Aha, that's what we were warned about. The fog in the pass made it impossible to see more than feet in front of your car, which together with the blind corners, made it insane. To make a long story short, I f'ed up and backed into the mountain trying to find a way to let 10 cars coming head on pass us. Good thing we had that damage waiver! We finally made it through the worst part, and when we saw the "Turn Back Now" signs in our rear view mirror, we knew we were done with it.

We then made it to Dingle, and were ready for the final days of honeymoon. To be continued...
Posted by Olaf at 9:05 AM