Putting the cart before the horse (part 4) 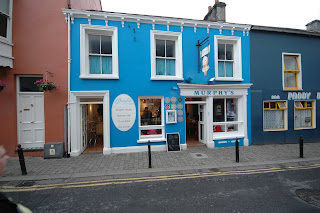 Our journey continued when we reached Dingle following the fool hearty trip through Connor Pass. Dingle, a quaint seaside town now brimming with tourists (we saw more tour buses in Dingle than we saw tourists elsewhere), still possess ample charm. Liz came in search of the legendary Murphey's Ice Cream, and I searched for the eponymous berries. At least one of us came away with the prize. Beyond foodstuff, Dingle offers a host of interesting characters, from the sharp witted dude in the ice cream shop to the tour guide turned B&B proprietor, the people were more interesting than the cows and sheep (which says a lot--really). 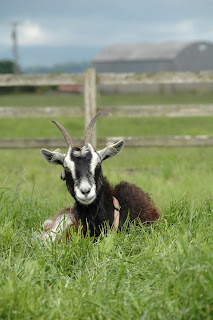 After strolling through town, and buying some umbrellas (Guinness of course--too bad it wasn't raining Guinness), we made our first journey around the Dingle Peninsula. While I was unsuccessful in my berry quest, we did rind roadside shrines, beehive structures, stone forts, and lots and lots of sheep in our first go round. We didn't stop for too much, as we were killing time (ouch bad pun, you'll see) while our B&B proprietor was attending a funeral. It was unfortunate, as when we met her, we discovered she had quite the attack plan for seeing all there is to see in the peninsula (and saving a few bucks with local knowledge and tricks). We also began our strategy for the next day's mission, the Ring of Kerry. 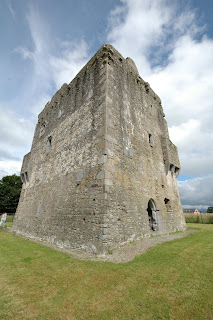 The Ring of Kerry, is a route around the Iveragh Peninsula, which has a spine of mountains, glorious valleys, and beautiful lakes. Oh, it overlooks the ocean too. We initially decided to follow the advice of the B&B proprietor and bypass the full blown ring, focusing on the Gap of Dunloe and a few other chunks of the ring without going whole hog on the 170 kilometer (105 mile) journey. On our way to the Gap of Dunloe, we saw goats (sadly the only two we saw in all of Ireland) on the roadside and followed signs to a nearby castle. We should have known that having goats lead us to a castle might make the castle a bit more WT than average, and the doublewide trailer, broken cars, and the "Villa Roma" sign indicated either we were in some long lost (very lost) Roman Villa, or in the land of Irish Rednecks with a sense of ironic humor. I'm not sure which would have been the better option. 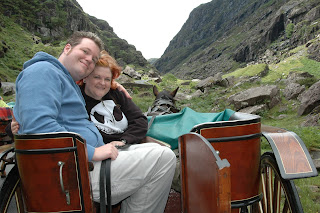 The Gap of Dunloe is a valley that's composed of grazing land for sheep and a narrow road that's closed to traffic, unless its hoofing it. When we say hoofing it, we mean allowing an animal with a hoof to do the dirty work, in this case a horsee names Beauty. Bueaty was driven by a dude with a heavy Kerry accent, lots of stories to tell, and aparantly a cell phone with awesome coverage. We rode into the valley and back, passing folks who really didn't understand "hoofing it", running into horse traffic, and watching silly Americans develop saddle sores that will make them walk like the survived Deliverance. 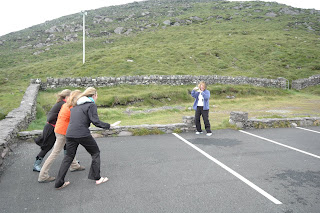 After our horsee trek, we had plenty of time left, so we decided to throw caution to the wind and take on the ring. Along the way we had pancakes, visited some forts (being cheapskates and not paying), snapped a lot of pics of sheep, and enjoyed the breathtaking scenery. One of the most vivid moments was watching a bunch of tourists who were congregated in an incredibly windy break in the mountains try to take a picture. It must have been a sustained 50mph+ wind with stronger gusts--it was rather funny. Beside that we saw more trailers, surfers, lots of big ass buses, and more sheep. We made it through the ring in good enough time to make it home to Dingle for dinner, and another journey (remember it stays light until 10:30pm!). 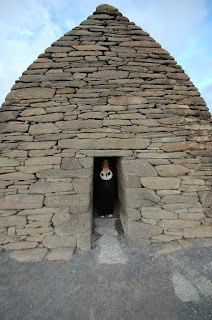 After tapas, you know the traditional Irish dinner, we decided to re-do the Dingle Peninsula. I had the brilliant idea to go the opposite direction that we were given directions in, which likely would have just been novel had the map been more accurate than One-Eyed Willy's treasure map. Despite our wanderings, we visited an oratory that was 1400 years old (ie not built in 1400AD, rather 600AD) and still holding up well, some ruins that were ruined, and caught a glimpse of the Sleeping Giant. By then we were actually seeing the sun set, and it was soon time to retire. Our two days in Dingle, along with our journeys in County Kerry were wonderful. Sadly we only had one more night in Ireland. 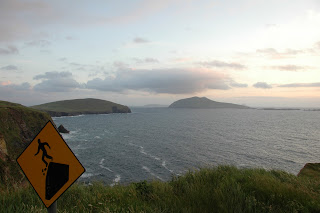 Our last night was in Bunratty, which is conveniently (and I doubt not coincidentally) close to the airport. We made decent time, including another visit to Limerick, but alas when we left the charming company of our B&B there, we were too late to visit the local castle. Having already heard Sinead, or gracious host fail to get us a reservation at the castle for dinner, this was a rather crushing disappointment. Desperate times call for desperate measures, and damnit it was our honeymoon. In a land where divorce has been only legalized in my lifetime and where having kids out of wedlock is still tantamount to being shunned, I knew the power of marriage and being on a honeymoon had to have some traction. Fortunately our efforts to fly standy at the catsle paid off, and we were able to feast on soup, ribs, capons, and other medieval fare. Ironically enough, we were seated accross a family from Powell. Before you know it, the night was over, as was our Irish honeymoon. The memories will last forever, and we'll likely find ourselves back in Ireland someday.
Posted by Olaf at 9:39 AM