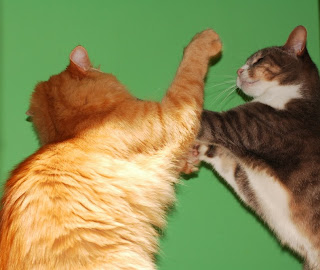 For whatever reason, Fight Club, both in it's book and movie forms resonated with me. I'm not sure if it's being stuck in a corporate America morass, a fondness for Ikea, or just a taste for violence. Whatever, it's cool, I'm cool, and I'm doing my part--well if you ignore those first two rules.

Do I show up to work with shiners, spit out needless extra teeth in meetings, or try to pick fights at work? Maybe, but that's beside the point. Fight Club is bigger than Tyler Durden, it was an institution--a way of life. That's what I'm on to. While the soap making has yet to kick into full gear, the ass kicking is alive and well. I guess my fight club started when I had two eager disciples who weren't separated by bars, but bloodlines tended to quash matters more than steel bars. Fresh blood, new blood, hungry blood really livened things up. 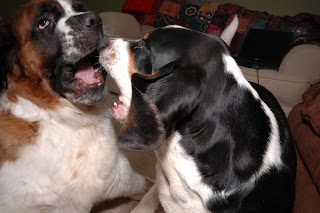 Michael Vick really got into a quagmire with his whole operation, but he had it all wrong. Rather than train animals to be aggressive, violent, and hungry, one can just adopt ones who have that potential. Then all you have to do is feed, nurture, and support them. In time it all takes care of itself; all you need is a camera. Leo and Adler (above) sometimes have epic cat fights, but they are nothing compared to the earth shaking chaos that is a Kuma and Stuart bout. Kuma is sorta like an Emo Andre the Giant. Big, strong, but somehow not that menacing. Stuart is rather like X-Pac, little, greasy, and really really really hard to root for. At first Stuart defied logic and all reason, by whipping up on Kuma. Poor Kuma wasn't getting enough calories to have the energy to fight back. A hearty diet, some encouragement, and maybe a little goading, and Kuma the Giant found himself. Stuart was never the same. 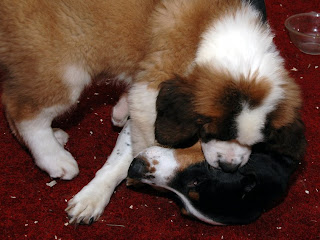 Things got worse for Stuart, as little Magnus is fast becoming the Kimbo Slice of Columbus. He's never ran from a fight, and I've never seen fear in his eye. The little warrior tears toys from Kuma's mouth, makes Stuart run like a coward, and has even tried to gnaw his daddy into submission. His training has just began, and he's gaining a pound a day. We may have to bring in Godzilla to give him a good workout or fly him to Spain to run with the bulls. Until then, Kuma and Stuart will have to do. Poor Stuart! 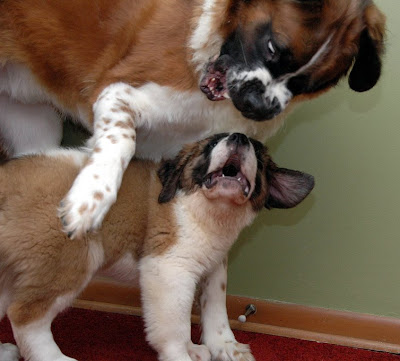 Learn the foundations, grasp your strategy, and the game itself, as you might not need to lose big cash} while still not sure of method to|tips on how to} play. If you don’t have reserves to wager, you then would possibly as nicely 카지노사이트.online not play at present. Before you hit the casino ground, observe how much you propose to spend. And while on the casino, track your wins and losses to ensure you|to make certain you} keep on target. Equally essential, the payout percentage mathematically determines how much you would possibly lose.