It Could Have Been So Much Better 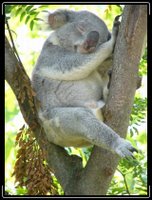 Yesterday was the annual outing to my employers annual outing at the zoo. My employer, whose name will remain confidential (though it would appear with Haitian pride in rhyming dictionaries), sponsors an outing to the Columbus Zoo once a year. It's not free, though it's close enough to that, and with the zoo being a popular destination, my employer a big one (apparently with rather fertile employees too), Jack Hanna making his annual appearance, and the weather being nice for a change, we had the perfect storm of crowds. Which means, it wasn't the perfect day for the zoo. 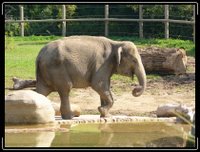 Let me get the fact that I love the zoo out of the way, and I especially love big lumbering animals (me being one helps in that regard). This gives me a great deal of positive inertia that normally overcomes obstacles, but yesterday I was put to the test. We got an early start, not insanely early, but early enough. I was surprised to find that every one else got there early too. Not a good sign. We stand like cattle ready to get slaughtered as we ease our way through the line to get in, and we dart past the huddled masses at the entrance to see the elephants and new exhibits, and from that point until our departure several hours later, we were constantly outnumbered by kids, strollers, and the occasional kid actually in a stroller. I'm not expert, but isn't the reason for the stroller to haul the kid? Also, if a kid is too young to walk upright for a sustained period of time, why bother with the zoo. You can just take them to a taxidermy shop or somewhere else and lie. They won't know the difference, and I won't have to hear there screams, smell their diapers, or remove their pudgy bits of flesh from my shoes when I accidentally step on them. 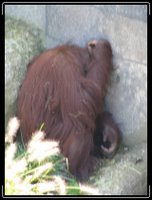 After an hour of concentrated birth control, we tried to scavenge for food. This year the food that's included in the tickets was a giant buffet (a hot dog buffet at that) with an even more monstrous line. Liz and I were about as eager to wait in that line as our vegetarian friend. Pretty much at that point any one of us were willing to just hop in one of the animal pens and do what the critters were doing--hiding. I've never seen so many animals from so many diverse backgrounds hiding--many just cowering in the corner, trying to get away. I totally understood them, and I wish I could join them. It was that crowded, and there were that many kids. Between tortoises hiding behind bushes, orangutans curling up in balls in corners, and pandas, tigers, and otters seeking refuge in caves (not the same one--fortunate for the otters and pandas), there wasn't much to see. Many more animals just were missing, likely finding places behind the scenes to hide. Fortunately the usually sleepy koalas were awake enough to move a bit, which served as the highlight of the day--well that and the walk back to the car. 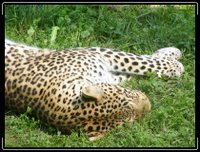 After I got to the car, I scraped some odd bits of kid off of my shoes (along with some bird shit from my shirt), and we were on our way. I hope to go back, but hopefully on a much less crowded day.
Posted by Olaf at 9:47 AM