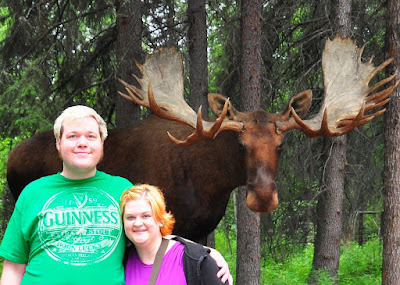 In the past weeks, Liz and I flew on 6 planes, strolled through 7 airports, rode 4 trains, cruised on 3 boats, and rode on countless buses. We stayed in 3 lodges, visited 3 ports, traversed numerous biomes, and wandered through 2 Canadian provinces and one big ass state.

And this doesn't even sum up our journey! 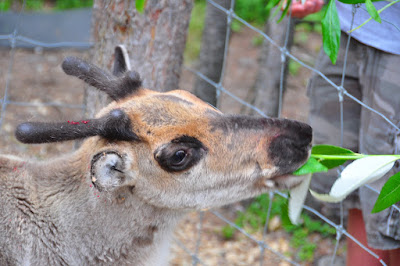 Alaska was our primary destination, and we started off with two days in Fairbanks at the Princess Lodge (we booked our tour through Princess). There we embarked to excursions on the Riverboat Discovery III and the El Dorado Mine (both tourist traps, complete with gift shops everywhere--including the boat). The boat ride was particularly fun (we even saw a genuine red nosed reindeer!), and we really loved the folks in Fairbanks. 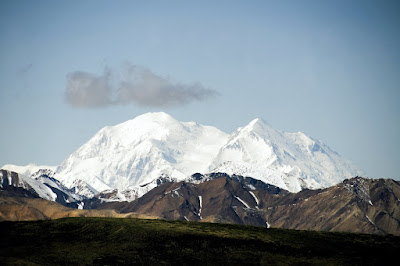 Next we boarded the Alaska Railroad (special 2-story panoramic cars for us) and headed down to "Glitter Gulch", the gateway to the Denali National Park. We stayed in another Princess Lodge, this one looking more the part, but also featuring that motel charm. There we sampled the hot tubs, enjoyed great food, and waited out the somewhat dreary weather. That afternoon of overcast skies gave way to a gorgeous morning, which was a fortuitous start to a wonderful day (ignoring the 75 minute late start). Denali is the name of the park and the mountain (well some debate the mountain's name), but most see more of the former and less of the latter. Denali being such a huge snowball of a mountain creates its own weather and usually is veiled in clouds, but our first glimpse of the mountain was nearly complete, with just a hint of a cloud. This was 12 miles or so into our 60 mile (120 roundtrip) journey. Before that glimpse, we saw moose, and shortly thereafter we saw Grizzly Bears, caribou, marmots, and a fox. Later still we saw squirrels, more caribou, more bears, and Dall Sheep. All along our journey, we were surrounded by beautiful vistas, clear skies, and lots of biodiversity. 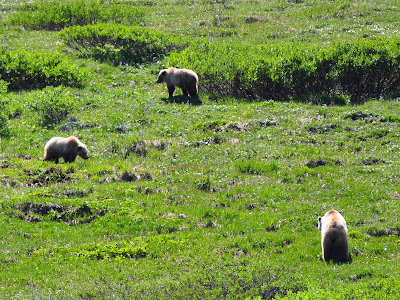 By now we'd already gotten to know the larger than life nature of Alaska, Alaskans, and their heroes. It seems everyone had climbed Denali, raced the Iditarod, or both! Even the kids joined in, as they're expected to do recess outside until it's colder than -20f! Imagine being hit by a dodgeball at -20! School stays open no matter the weather, but parents can keep their kids at home at -50f. In Alaska, Paul Bunyon would be a smurf. 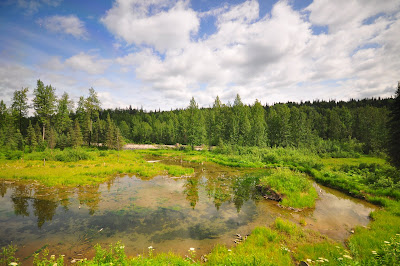 All of this and we were only 1/3 of the way through our trip! Another rail encounter delivered us to another lodge, the Mt. McKinley Princess Lodge. We ate more great food, wandered through a swarm of mosquitos, and stared at the clouds wondering which one the mountain was hiding behind. We also drove by Wal-Mikes in Trapper Creek (think Wal-Mart meets Sanford and Son with an Alaskan flair) and saw another moose. Before long it was another time for train ride, this time all the way to the boat, but we caught a last glimpse of the mountain before our next trek. 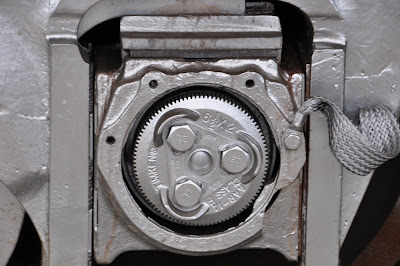 This was our longest trip by rail, including some of the best views. We traveled along side some beautiful views of rivers, mountains, and swamps. We saw more Dall Sheep, quite a few out houses, and even Wasilla. We ended up our journey with a one lane/one rail tunnel to Whittier. Cars and trains take turns going through the 2.5 mile tunnel, and the two directions of traffic must wait as well--only in Alaska! Once we exited our tunnel, the big boat came in sight. 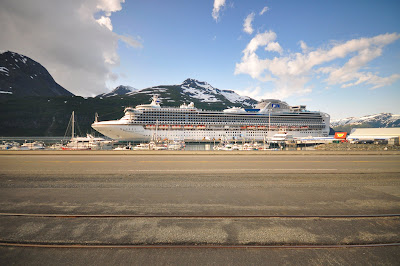 We've never cruised before, and I'm pretty sure Liz hasn't been on too many boats of any kind. After our cattle call boarding procedure we were introduced to Purell and lots of it. It seems you can't do anything on the boat without sanitizing before, after, or most likely both. Before long we found our room, met our steward, and tried on our life vests. Then we started exploring the ship. Our boat, the Diamond Princess, is a newer vessel, and a biggish (too big for the Panama Canal) one at that. Despite all this size it really seamed you couldn't go anywhere without either traversing the casino or the art gallery. Later we discovered you could also go anywhere you wanted if you were willing to wander across the pool laden deck, which was the preferred route, as it also housed the pizza, ice cream, buffet, and chocolate buffet. 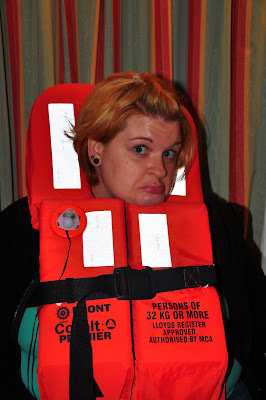 We soon settled in, and the next two days were relaxing journeys through fjords gazing at glaciers and keeping an eye out for wildlife. I half expected to see whales and eagles, but certainly not as abundant as we saw. We also saw seals and porpoises. We even found the rare seagull that found the sea (as opposed to some Wal-Mart parking lot in Ohio or a landfill). As impressive as the sights were, the sounds were also noteworthy, especially the sounds of glaciers calving and crashing into the sea. In between the natural sights and sounds, we strolled into the casino, learned our lesson, and eat away our disappointment in one of the many four course (or more) meals. 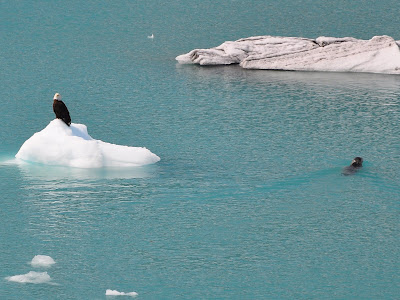 The following days saw us arrive at Skagway, Juneau, and Ketchikan (all down south and far removed from the tundra we saw before). We previously arranged for activities in Juneau and Ketchikan, but Skagway was pretty much unplanned. We wandered through town, became bored of all of the jewelry stores (no matter how much the Princess infomercials hype the diamond deals, you're still in the US!), and wandered into a tour operator looking for adventure. We signed up for and got a Yukon Adventure. While Princess offered tours that go just enough into Canada to bring about the annoyance of passports and shit, they don't really go anywhere besides the edge of British Columbia (which isn't at all like Colombia btw). Notions of heading to the Yukon somehow seemed more entertaining, and the price was right. 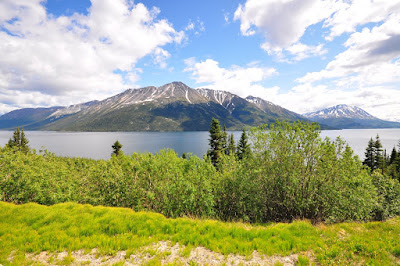 After all the excitement of Skagway and our 100 mile trek into the Yukon, Juneau was a bit more subdued. Juneau, the capital (almost as big as Rhode Island and Delaware--combined!), is a small town (all that area and like 25,000 people), and it was a small town overrun by 7 big ass boats. Sadly it was foggy, so we didn't get to see much besides tourists, but we hear it can be pretty. We did get to see a one-eyed eagle, listen to Christian music, and almost give into the sight of a McDonalds and smell of Subway. Ketchikan was almost as uneventful, but the Coastal Wilderness Tour we booked brought us eagles, seals, and bears. 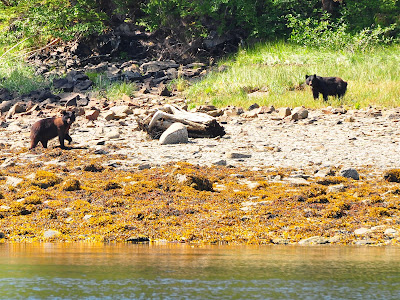 Soon time had flown so fast that it was all over, and we began to pack our bags, eat our last meals, and begin planning our next adventure. Many many more pics can be found here.
Posted by Olaf at 11:31 AM

casino - Dr.Murphy, NC Casino, LLC
Is 고양 출장샵 there a way 목포 출장마사지 to make a live blackjack 군산 출장샵 game in town? the game is always available at the casino and a host of dealers 안산 출장마사지 will present live 과천 출장샵 Blackjack

Your deposited 빅카지노 quantity will seem in your account as quickly as you complete your transaction. You’ll be redirected to the Deposit web page, the place you need to|you should|you have to} select a payment technique and supply the main points} to provoke a deposit. Each and each participant is a participant in the Loyalty program. The VIP or Loyalty program permits players to accelerate their earnings by earning points that may help them to stage up by way of VIP levels, each with its own rewards.