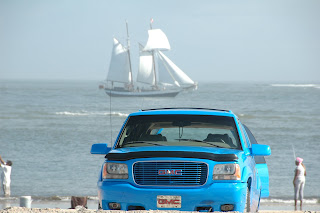 Somewhere between trend and tradition lies our habit of celebrating Christmas with our families on alternating years. Christmas 2006 saw my parents (and much to their disappointment their mild Florida weather) visit us in Columbus; in 2007 Liz and I make the trek to Sacramento; and now this Christmas past, Liz and I flew down to Jacksonville to spend Christmas (and Kwanzaa) with my parents. Much to my mom's disappointment, it was even warmer than usual (mid 70s, so no cranking up the AC just to be able to light a fire). It was however, a very nice experience, as we hadn't had the chance to see my folks since our wedding. 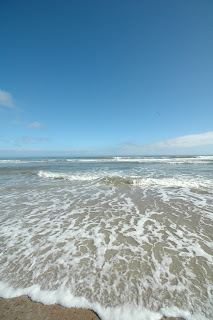 I won't bore you with flight details this time, and Christmas itself was pleasant, but not blog worthy, so we'll just start from 26th, the first day of Kwanzaa.  We headed off to Anastasia state park, where we wandered on the beach, taking in the salt air, scouring for shells, and taking snap shots of the scenery (where else does one find pickup trucks and pirate ships?).  We continued on to Vilano Beach for more of the same.  We began our seafood smorgasborg (like grizly bears we load up for a week and have to make do for months--due to Ohio's shitty seafood selection--without) in the afternoon, and for dinner we chowed down on 2lbs and 3.5lbs of crab legs respectively. 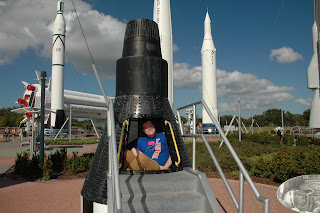 A couple days later we began our central Floirda sojourn by heading down to Kennedy Space Center.  Most Floridians are ambivelent to the space center, but I always enjoyed it (despite to too numerous field trips there), and Liz has never had the chance to go.  Fortuitously we thought enough to plan ahead (a day ahead) and reserve our tour, which in case the fortuitously comment didn't imply that they were sold out when we got there, lets just say they were.  Beyond that the place was fuckin packed, but we managed to make the most of it all.  I even surprised some Aussie tourists by squeezing in a Mercury space capsule, maybe Shaq has a chance to star in the remake of the Right Stuff.  After that we went on our tour with the overly passionate tour guide.  Dude really cared about his shit, and nothing quite riled him up like the differences between Kennedy Space Center and Cape Canaveral. 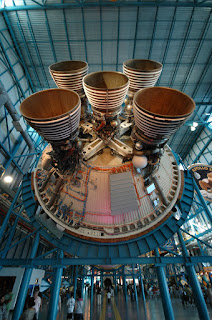 We then proceeded to cruise on over to Orlando, where we had one of the worst hotel experiences at the Rosen Shingle Creek Resort.  Beyond being snooty, snobby, and pretentious, they were rude, inconsiderate, and downright dirty (FYI, I wouldn't recommend it to others).  That being said, we went to Orlando for Disney, and the hotel realy didn't matter.  In an attempt to get away from our "resort", we headed to Downtown Disney.  A friend of mine warned me that the week between Christmas and New Years is the most crowded week at Disney, and she wasn't kidding (Kwanzaa must be gaining in popularity).  The parking lots at Downtown Disney were full--all of them!  We managed to cut through some cones and luck into finding a departing car.  Somehow it never seems as crowded within the friendly confines of your (even if just a loaner or rental) car, and it was almost overwealming on foot.  Having spent the better part of a week in the Downtown Disney area, we knew our way around, and we managed to make the most of it, even if it meant being a couple minutes late with the Magic Kingdom fireworks (as seen from the Polynesian's beach). 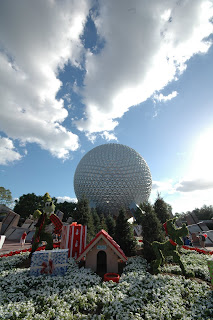 After dealing with the huddled masses the night before, it was no surprise that the parks were packed the next day.  We started off by parking at the Magic Kingdom, and hopping on the bus to the Animal Kingdom (the Magic Kingdom was open to 2am and the Animal Kingdom closed at 8pm), and after catching a fast pass for Expedition Everest, we hiked to the safari ride.  There we enjoyed our first stay in line.  After that we headed over to the Bugs Life 3d movie thing, which was fun, and afterwards we took on Epedition Everest, which ended our time at the Animal Kingdom (we had seen almost everything in our previous visit--we'll do Nemo next time Liz!).  Craving Norwegian food, we hopped on a bus and headed for EPCOT. 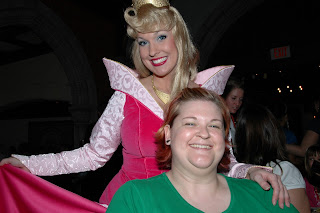 Since we were planning on returning to the Magic Kingdom to close off our day and squeeze in the Hollywood Studios (no longer MGM) for Fantasmic and the christmas lights, we were essentially deciding to do all four parks on a day where it was so crowded at the Magic Kingdom and EPCOT that they stopped allowing more new guests in.  What the hell, we're young and crazy, so why not!  Once we got to EPCOT, we wandered over to Norway, where there was a bit of a queue of people with reservations (many books 6 months prior), so we were gonna have to dine standby.  Unlike other Disney restaurants, Norway (a princess dining experience), seats in waves, and just about everyone has a reservation.  Stanby guests can get in when someone doesn't show up, and after a 40 minute wait, we got in.  We followed the line through, and got our picture taken with Belle, and then we were able to finally eat lunch.  As we ate many princesses (and non princesses, as Alice from Alice in Wonderland crashed the party) stopped by for photos and such, but somehow I still missed the old Norway experience: empty restaurant, buffet laden with stews, reindeer, and odd bits of pickled and smoked fish.  Oh well, the kids enjoyed themselves, and I was able to chow on salmon--a true win win. After lunch, we went on the revised Spaceship Earth, and then headed over to the Hollywood Studios. 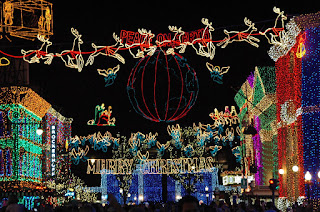 We had two goals in mind for our trip the the Hollywood Studios: Fantasmic and the Christmas lights, but alas we needed to wait for night for both.  We ended up getting in line for Fantasmic about an hour and a half before the show, but at least we were able to sit for most of it.  While waiting, the crowd started busting out waves, fast waves, slow waves, and other nonsense.  The show was delayed for a bit, and we got even more waves--wahoo!  Eventually the show went on, and afterwards we saw the Christmas lights.  Had we not been supremely underwealmed with the light show at the Columbus Zoo's Wild Lights, I may have expected more.  There were lights--lots of them.  Thats it.  We then headed to the Magic Kingdom, by way of the Polynesian.  We barely missed the last train at the Magic Kingdom, so we had to brave the hoard of people waiting for the fireworks just to get to our intended destination, and before we got there we got to watch the fireworks.  Afterward we enjoyed fries, a sundae, and a trip to Pirates of the Caribbean.  Before long we were starting to get puckered out, so we made our way to the exit.  The damn parade was going on, but they waived people through to cross the parade during a break in the action.  Liz and I started across, I was waved forward, but she was held back, we were together holding hands, but so much for Disney family values.  Desperately wanting to leave, we pleaded, were waved on, before I was clubbed, ney clotheslined by some Disney employee asshole, who felt that we somehow were going to endanger the dude in the wolf suit twenty feet away--there wasn't even a vehicle coming!  Could he have quickly escourted us across, yup.  Could he have not waived us through a second before, yup.  Could he have told us to hurry, yup.  He'd rather clothesline me, and no he didn't even apologize.  I guess the show must go on.  Don't think I'll forget that one Disney.

All in all it was a blast, and we were able to sneak in a trip to a fish camp (hard to explain, but I've only seen such things in Florida).  I managed to eat bacon every day there, and we returned home to our wonderful furry family.  Who could ask for more?