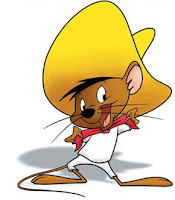 As a kid, I watched my share of cartoons, and the amalgamation of Loony Toons creations was a part of this educational experience. Among the cartoons was the tale of Speedy Gonzales, which always seemed a little wrong. Was it the fact that Speedy was supposedly the same species as Mickey Mouse and looked nothing like him? No, it wasn't that--Pluto and Goofy as well and Daffy and Donald have prepared me for that. Was it the fact that over the top ethnic stereotypes was a part of overall premise? No Bugs Nips the Nips took that concept to new lows. Was it the depiction of Speedy's stoner cousin Slowpoke Rodriguez? Nope. I just didn't know what seemed so off--Until now! 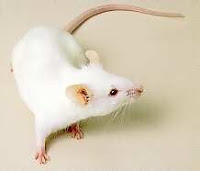 Now it all makes sense. Speedy wasn't a Mexican mouse, rather he was a Chilean chinchilla! Sure he wore the sombrero and lived in Mexico, but he likely made a wrong turn Santiago or something, and well--maybe he just liked the look that a sombrero helped him pull off. You see, mice aren't that fast, nor are they that cute. Basically they're just snake food (I can't wait until Mickey's copyright finally lapses and some of that stuff gets animated). A clever speedy rodent with big ears and a long tail, well that's a chinchilla. I know that now that we've adopted one. Yes the old homestead has gotten more crowded. Now there are two guinea pigs, three kitty cats, a bunny, two dogs, a turtle, and a chinchilla.

Pedro is his name, and we adopted him last Saturday. He's a nocturnal fella, and well he's a bit different (who else bathes in dust?). He's started to fall for our bunny Petra, who I suppose is as close of a critter as we have in our petting zoo, but I'm old fashioned about inter species romance. I suppose the times are a changing. Now we just need to get the little fella a sombrero to round out his wardrobe.
Posted by Olaf at 7:12 AM