The Dark Side of Food

Lately I've been eating more than blogging--well, I tend to always eat more than blog, as it would be rather boring and my fingers would bleed down to the bone otherwise--where were we? Ah food. Well, I've had a few odd encounters and more than a few wise non-encounters with bizarre creations.

Living in Ohio, home to all things fried (including Pepsi), I'm used to encountering fried pickles, fried, Twinkies, and my favorite (really they're delicious) fried snickers, so I suppose it shouldn't be alarming that a recent commercial for Steak n' Shake mentioned its lighter healthier fare, including a sandwich with not one but two fried pieces of what they described as chicken. Speaking of Steak n' Shake, well more so speaking of having the shits, the documentation that comes with Alli mentions bringing extra undies with you everywhere just in case something leaks out:


Now if that's not enough to help you loose a few pounds, I dunno what is. Oh, speaking of leaking out, recently they've been showing these macho older dudes riding on Harley's and shit and talking about pissing oneself. I can't recall what the things were called, but I joking call the dude diapers Hoggies.

Gosh, where is this going? Who knows--back to food. While wandering through the various midways and exhibit halls at the state fair I saw a poster advertising a roast beef sunday. Yeah, you read that correctly. Who needs, fudge, caramel, nuts, and that lone cherry when you can have mashed potatoes, gravy, meat that's claims to be beef, and cheese glorious cheese!. Maybe that have cans of whipped sour cream to spray on the top. 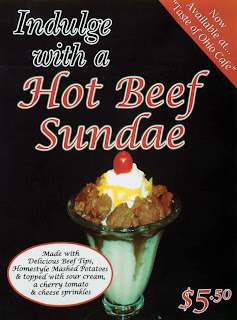 Perhaps the only thing scarier than this is a poster I saw last week. While wandering the halls of my workplace I saw an advertisement for a lunch special for today (8/13/07--the day that will live in infamy). It mentioned that there will be sushi in the cafeteria. Next to McSushi, Nationwide cafeteria sushi is about as dubious as it gets. Oddly enough, my girlfriend designs ATVs or something like that at Honda, and they don't have sushi in the cafe--maybe that should be a damn good sign that we shouldn't have it here? Well I wandered down to check it out, and thankfully they veered clear of raw fish, but they did manage to create many combinations that should never ever be made again. Just because you can make some odd rice dish, it doesn't mean you should roll it in seaweed. They had some form of rice pilaf rolled up like sushi. WTF? At least the lady behind the counter looked passably oriental, not that that means much--some of the best sushi I've had was made by Mexicans. She probably got her degree in the sushi arts at Devry or ITT tech or OSU--they all blend into one school in my mind.

Maybe I should get my appetite back by ogling at a root beer float cupcake.
Posted by Olaf at 12:52 PM