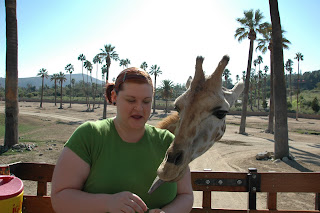 It almost never got this far, as we arrived for our "10am" flight at 8:30--too bad it really was a 9am flight! Amazingly we ran, breezed through security, and luckily all was well. Despite a few minor calamities at rental car counters, over aggressive valets, and bum fights, we made it! Sadly these delays made us too late for the zoo, but we did get to go on a hippi safari in Balboa park. 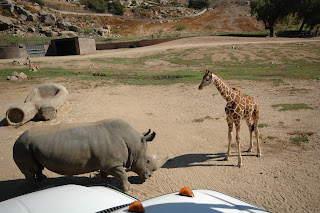 We sought adventure on our first full day in San Diego, and we went to the San Diego Wild Animal Park. Being on vacation we spluged on a African Photo Safari, where we got to drive amongst the gazelles, antelopes, rhinos, and giraffes. We actually got to feed giraffes, but the cutest thing was watching the rhino rub his itchy back on the truck we were in. Almost as amusing as the rhinos was watching the people and their interactions with the animals. Sadly we really wanted to feed the rhino, and that was another tour. We had a blast nonetheless.

Afterward we got to chill with Liz's peeps, eat great mexican food, and watch a shitty movie on an awesome TV. 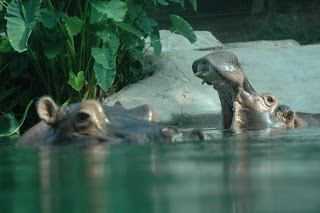 Another day, another adventure. This time the San Diego Zoo was open, and the place is huge! We trek through the humble Columbus Zoo often, but this place is off the hook. The rate paths for novices, intermediate, and experts--some have warnings for those with wheelchairs. We hiked and hiked, and finally, we fould the pandas! Damn things don't do much. They're sleepy pacifists (the speghetti monster gave them the digestive system of a carnivore but they eat bamboo). During our journey, we passed three different meerkat enclosures, and a whole lotta pigs. We've never seen so many pigs (or types of pigs) in our life. 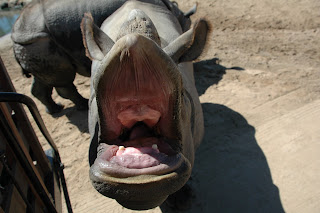 We still wanted to feed the rhinos, and that's where our next day would take us (back to the Wild Animal Park). The rhinos are absolutely adorable, and they just sit there and chow apples. Well, first we had to track one down, and after some coaxing, we were chucking apples into their huge heads. They're a bit bashful at first, and once they're full, its time for a bath (ever see a rhino roll on his back--we have!). The rhinos actually reminded us a lot of our big dogs.

All in all I took thousands of shots (see below), and he had a blast. We did everything we could have wanted to do, plus a bunch of fun work stuff (dinners, conference, and a hokey conferment ceremony). After all was said and done, we began our trek north. Along the way, we stopped at a favorite restaurant of Liz's, and I got a t-shirt for winning the Gamblers Challenge (eat a 35oz sirloin). Kinda sad a rhino gets some apples and I get a sirloin the size of a cat!


Excellent Blog! I would like to thank for the efforts you have made in writing this post. I am hoping the same best work from you in the future as well. I wanted to thank you for this websites! Thanks for sharing. Great websites!