Ever wonder what it's like being Tom Jones' tour manager or maybe Niel Diamond's roadie? Whew, I though I was the odd one. Anyway, besides being trampled by over exuberant ladies and maybe some confused dudes, I'm sure it's got its charms. You never get bored or are at a loss for good people watching. The closest any mortal will ever get to this insanity is taking Magnus out in public, as like the lure of Mr Jones and Mr Diamond, he's irresistible. Actually, his draw is much much stronger. 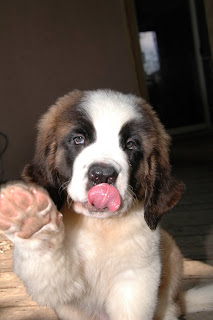 I suppose it makes sense, animal attraction to of all things an animal, but Magnus is so much more than an animal. I imagine maybe the Dalai Llama or some other quasi deity strolling through Tibet may get as much attention as our dear Magnus, maybe on a good day, but I doubt it. You don't believe me? Mom's abandon babies in shopping carts, cashiers leave their tills, and grown men become as sappy as a little girl with their first little pony. Even people used to being around puppies are compulsed to touch him, to dote over him, to merely be near him. Other dogs feel the lure too. Everyone wants to be near the Magnus, though ironically enough, Magnus just wants to lie by my (or Liz') feet and lay low.

I suppose he's a bit like a fluffy (1980s) Michael Jackson. Gosh, I hope his fur doesn't turn all white. He does has a high pitched bark, and I've seen him playing with my gloves. Hmmmm