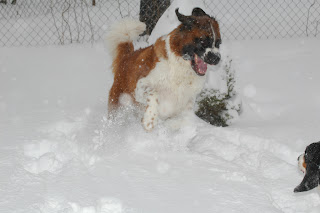 Columbus, OH doesn't tend to get a whole lot of snow (compared to Cleveland or Buffalo), and until debacles in recent years, the city lacked any kind of adequate capacity to clear the streets to allow life to go on. Now this doesn't stop forecasters, reporters, and the average Joe from spreading frightful tales of the coming "white death" every time there is a chance for snow. The only thing more comical is watching reporters with little else to do but stand near a mound of stored up rock salt and and point cameras at the sky to watch little flurries fall. 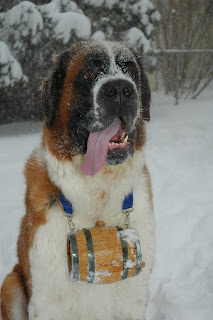 So when these accounts began again on March 6th, foretelling a snowstorm like none other this year--one with 4-6 inches of snow on Friday March 7th, well Liz and I dismissed it, and we expected the usual weather Cheerio to save Columbus. Weather Cheerio: Liz's term to describe the phenomena where bad weather--notably rain and snow, tends to encircle Columbus, but not inflict its wrath on Columbus itself. Anyway, we both went to work and expected little if any drama. We even made plans to join my friend/coworker Shawn at a hockey game Friday night. In short, we heard the boy cry wolf before.

By mid morning, it appeared that they were underestimating the amount of snow, but it likely was just coming down sooner rather than later. After lunch rumors of my employer sending non essential workers home spread, and outlying school districts closed early. Then roadways began to get all jacked up, as folks couldn't see due to the whiteout, and the snow and ice were piling up faster than any plows could address. I dare not mention the overall incompetence of Columbus drivers. It was getting ugly. I let for work early, and Liz did too. This was before they declared a Blizzard warning. 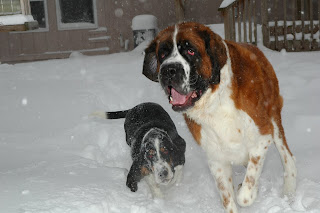 We finally realized that they weren't crying wolf, but they were still wrong. We got the predicted amount of snow well before the worse was to be unleashed. Now they were forecasting 14 inches! Not being one to look a gift hockey ticket in the mouth, Shane persuaded Liz into braving the blizzard. Oddly enough, while 99% of all businesses were closed and the county recommended staying at home, it was clear and sunny--the calm before the storm.

After the game and for another 18 hours it snowed, and it typically was heavy. At times it was hard to see through the blowing driving snow, but the boys and I found some time to play in the snow and take pictures. I even ventured out to score some pizza, but that proved rather irrational. 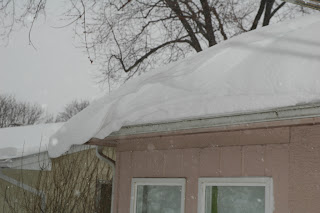 In the end we got about 20 inches of snow, watched a whole lot of shitty movies, and suffered from cabin fever. While I got a bit of exercise shoveling snow, we were saved with some dudes and a truck plowing our driveway to freedom. Thank god for Mr Plow!
Posted by Olaf at 2:59 PM